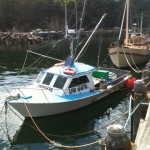 The first rays of the sun were glinting on the fishing boats alongside the Eden wharf while I dawdled over breakfast at the cafe at the head of the jetty. I’d arrived early and was waiting for Tim Crane, a fisherman here at Eden who is wondering, like me, whether a Cruise 4 could drive his 8 tonne fishing boat at trolling speed.

I don’t know much about fishing, and the idea of trolling was connected with freshwater bass fisherman who use small electric motors for manouvring small fishing punts at low speed.  And come to think of it, I know a few cruising yachties who occasionally troll for dinner by trailing a line when lazing along at 3 or 4 knots.  But the notion that professional fisherman use trolling to make a living was not something I knew about. 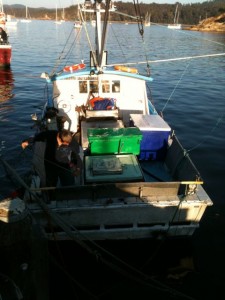 This line of scuppers on Chinook could be useful...

So I’m looking forward to finding out how this works and whether the Cruise 4 will be able to do the job.

Our mission is to knock up some kind of bracket to attach the Cruise 4 to the transom of Tim’s fishing boat, Chinook. Take a look at the stern of Chinook…  Tim has an idea to run some bolts through the scuppers to support a sheet of plywood—if we can get this to work it will avoid drilling any holes in the boat. As well as the sheet of ply we have a variety of planks and a proper outboard bracket that Tim had up the back of his shed. It didn’t take long to attach the ply and with that as a mounting frame we could attach the outboard bracket to it.  We wanted the Cruise 4 to sit so that the top of the propeller was just below the underside of the hull—so its pushing in clear water. 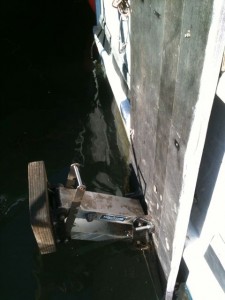 The outboard bracket ready to roll...

The Cruise 4 I brought along for the test is my own motor off Current Sunshine, and its a short shaft version which is not ideal for this use.  The top of the motor is barely above water level so its comforting to know that its waterproof.  Even the long shaft version will still have its top close to the water in this type of installation.

By running some bolts through a scupper and through a short plank on the inside we could tighten the plywood sheet against the transom in a secure way.  The outboard bracket was bolted to this and we positioned it just about at water level. Because the bracket is adjustable it gave us the option of fine tuning the height of the motor once we were under way.

We had no plan for steering the Cruise 4 and figured we’d use the main rudder for that. A few other fisherman were watching closely what was happening here and not shy in taking the piss about the idea of using a electric motor.  Cos they’d never heard of an electric outboard that wasn’t gutless and the idea that it could drive this fishing boat at more than rowing speed was bizarre.

Chinook has a big Cat diesel and even at idle it pushes this boat along at 5 knots which is too fast for trolling. And not only is it too fast, it uses 10 litres an hour, so its quite a thirsty beast. 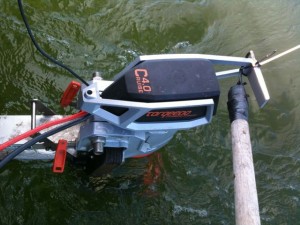 Using the gaff hook to steer the Cruise 4

Tim is hoping for around 2 to 2.5 knots as a ideal speed to tow the fishing lines.

We left the dock in stealth mode with just a few hundred watts of power it was doing about a knot.  After getting clear of the moored boats we gave it full throttle and it settled at around 3.7 knots on an outgoing tide. We then tried it at a few different throttle settings to get a feel for it, and we could see that a good trolling speed of 2 knots was easily achievable with the Cruise 4 running at about a quarter throttle. But we did have a helping hand with the tide going out so we also did a return run against the current—we needed bit more throttle and as much as about half.

This was ideal because to achieve the 2 to 2.5 knots needed from 800 to 2500 watts of power, so it leaves some more in reserve for pushing into stronger conditions such as a breeze and some wave action. 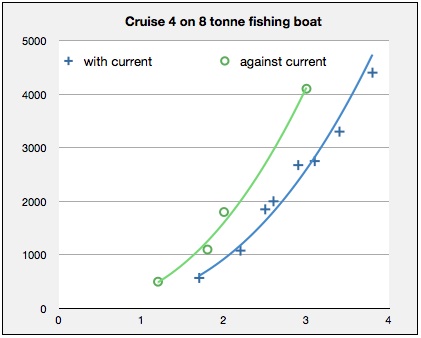 Performance curve for Cruise 4 on Chinook

On the way back in Tim experimented with steering the Cruise 4 directly using a gaff hook with a cable tie. When fishing he’s working aft and the ideal would be to be able to control the power and steering of the Cruise 4 from the working position at the stern. We figured it would be easy enough to set up some kind of tiller steering, and have the throttle control able to to be moved around where needed, perhaps using velcro to be able to stick it down or carry it as required at the moment.

By steering the motor directly it gave complete control over the boat and when we returned Tim easily docked the boat using the Cruise 4 alone—the main rudder being set amidships.  We only used the main engine just for a moment when leaving the harbour.  But after getting familiar with the response of the boat to the Cruise 4, it was clear that it could be used alone for leaving and entering the harbour and for close quarters manourving when docking the boat.

Chinook is a 10m boat displacing around 8 tonnes and is a Randal design. From our testing its clear that the Cruise 4 would be ideal for use as a trolling motor for this boat. 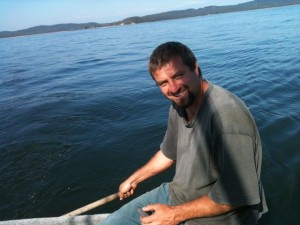 The fuel savings alone would justify the use of this Cruise 4 for this type of use. It likely that the payback period for this investment would be about 12 months.  For the following years the fuel savings of around $100 per day would be additional income for the business. By being able to set the speed of trolling to better match the conditions the catch is likely to increase as well.

As an added bonus, the fishing can be more enjoyable because of the quiet, fume free operation of the motor when running from the batteries. 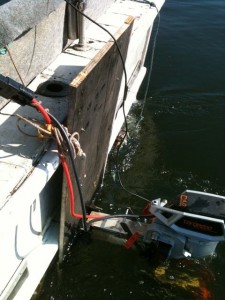 Bracket with Cruise 4 at low speed

Chinook already has a 8kVA genset and that can be used to run a charger to top up the Cruise 4 batteries. Considering eight hours of trolling per day, a suitable battery bank to allow that operation without recharge would be substantial.  To minimise this cost, the genset could be used in conjunction with a battery charger.  On the day of the test we did exactly this—the batteries I use for demos are quite small and it seem to have lost some of their capacity and so we needed to start the charger during our test.  For a permanent installation the sizing of battery bank and charger needs to be considered together. Ideally a 4kw charger would be best so that it could match the demand from the motor running at full throttle, without drawing from the batteries.