Sienna in the sun 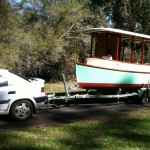 Sienna charging the batteries in the sun

Today I towed the Sienna out of the shed and into the sun to test the solar panels and the charging of the lithium batteries.  This is the first time the batteries have been charged as a group and they need to be watched carefully for the first few cycles until they become balanced.

After being in the workshop they have become covered with fine sawdust—after all it is a working boatbuilding shed and Derek has been working on other projects. And have a look at this lovely little sailing tender that Derek has been building. 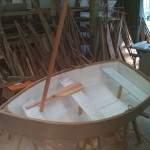 It would be fun to sail this little boat huh.  But back to the chase…

When I first took her out in the sun she was harvesting 8.4 amps from the sun. After the brushing the dust off, that increased by about  1 amp, and after washing them, another 1 amp.  But the sun was dropping in the sky quite quickly by then and the lower angle to the solar panels was reducing the output by about the same amount so after they were cleaned they were still doing a little over 8 amps.  This is about 200 watts. Under ideal conditions they should produce 560 watts. 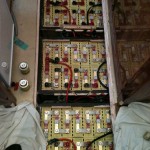 There’s 52 lithium cells in this boat and they will be at slightly different charge levels and so the first few charge cycles will be used to balance the cells. The highest charged cells will become fully charged first and their cell protectors will begin bypassing current, to bleed off a little power. The charging needs to be stopped soon after the first cells begin bypassing. Today none of the cells started bypassing. I’m not surprised because they had barely two hours charging before the sun dropped behind some trees.

I will cycle the cells a few times over the next week using solar charging and also mains charging, which will be easier than towing her out into the sun each day. 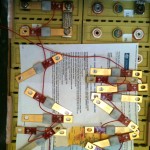 Today the battery management unit was not connected yet so to monitor the cells I used  multimeter to test continuity of the cell protector signal line.  There is a single wire that daisy-chains all the cell protectors together. This circuit on this wire is monitored for continuity and if this breaks we know that a cell has gone over-voltage. I have partly wired the battery management today and tomorrow it will be part of the system and so if any cell goes high the charging current will be cut automatically. 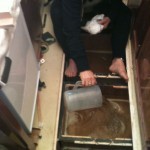 Deb helping out with the water testing of battery boxes

I want the battery boxes to be totally waterproof and during the building we filled each box with water to prove that it was indeed waterproof. The first two that I did leaked a little and this gave me the chance to fix them. The last two—see the picture of water testing—were ok. With a perspex top screwed down they’ll be totally fine if somehow the bilge gets full of water.  And being perpex a simple glance will show the green LEDs of the cell protectors to show all is well (or not if there’s any red ones).

As well as the engine batteries there are 4 house batteries (to make 12 volts) and these will be charged using a dc-dc converter. 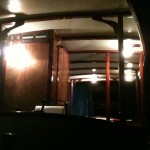 Sienna at night in the shed under her own lighting

Much of the work is now complete for the house wiring and you can see how nice the lights look at night. Even though this photo was in the shed you can still get a sense of the delightful woodwork in her.

We’ll be showing her at Noosa next Sunday at the yacht club and I’m hoping that all the electrical work will be complete by then.  This occasion will be the Scruffie Marine launch of the Sienna design and we plan to be able to offer short trips on her up the clean Noosa River. The Noosa river is the only river in a well populated area that is still largely in its natural state.  So its appropriate for the first showing of this environmentally sensitive boat to be the relatively pristine Noosa River.