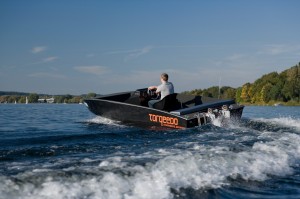 Is this the fastest Torqeedo powered boat? Powered by twin Cruise 4’s and running the speed prop it’s maximum speed so far is 26 km/hr.

This carbon version of the Gold Rush Aggressor was built in Australia for Torqeedo’s boss Christoph Ballin by Max Buhner at the Gold Coast.  It now lives at Starnberg, Germany where its used for fun and experimenting with different props to see how fast it can go. 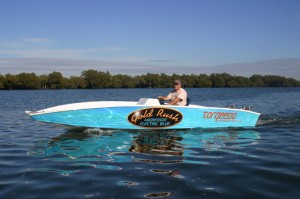 Claude with Electric Blue on the Noosa River

The original Gold Rush Aggressor was trialed by Claude Desjardins of Torqeedo Australia and for a short while it was the fastest boat driven with Torqeedo motors.

Known as Electric Blue she was sent to Germany first and then Christoph challenged Max to build him a lighter carbon version and the result is the sleek black boat in these photos. She is built from foam/carbon composite using the infusion method which results in minimum weight and maximum strength. The black you see in the photos is the actual carbon fibre matrix under its UV protective clear coating.

This boat serves as a nice test bed for the Torqeedo cavaliers to try to find ways to get to 30km/hr. They haven’t got there yet but don’t worry, I’ll let you know when they do.

Lake Starnberg is Germany’s fourth largest lake and on days off you’ll see this boat with Christoph and his wife and two daughters on board planing on the lake at 22-23 km/hr. The low speed performance of this boat is also quite surprising. 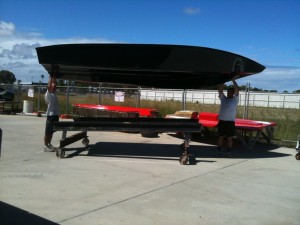 Here's a hint why the Aggressor performs so well - Max on the right.

Unlike most planing hulls it requires minimal power for low speed use, needing only 500 watts to travel at 4-5 knots (that is, 250 from each motor.)  Compare this with some of the other trials we’ve done on canoes, kayaks and dinghies.  None of which can match this low power demand.

And by the way, these figures come from the early Aggressor, Electric Blue, which was done as a regular fibreglass composite.  It was also carrying eight Optima batteries which is over 200kg, as well as two passengers. (I’d like to see the low-speed numbers for the carbon version.) 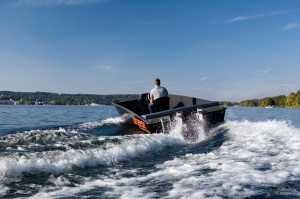 An electric boat with attitude

Back on Starnberg Lake, they’ve found that the so-called Speed Prop for the Cruise 4 is still not fast enough to get the speeds that this boat is capable of. At full speed on the two motors you see in the pictures, the power being used is less than 4kw per motor.  This means that the limiting metric is the rpm of the motor, not its maximum power.  This suggests there is potentially more speed to be gained and so it calls for a new prop.  I guess this would be the high-speed prop?  I hear they are still tinkering with different propeller designs as well as optimising the motor placement. 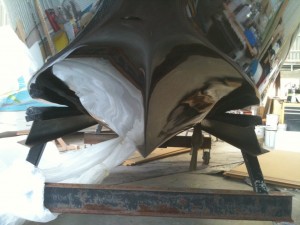 No winged keel in sight—but pretty sleek though huh.

Rumour has it that this Aggressor is now powered with Lithium batteries of a new Torqeedo design. My sources suggest this 24v battery has a capacity of 106 ah and weighs only 20kg. Four of these would push this boat at full speed for over an hour. This is a remarkably light battery – contrast this with the ThunderSky pack that I have on Current Sunshine which for 200 ah at 48v weighs about 125kg including the external battery management.  If I were to use these Torqeedo batteries the weight would be 80kg, a saving of 45 kg. 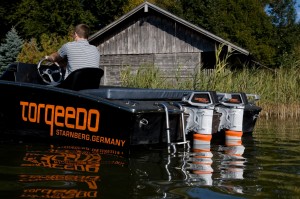 On Starnberg Lake, where the Torqeedo idea first hatched

Christoph and Fritz, the main directors of Torqeedo five or six years ago. Back then Christoph had a small trolling motor and was showing his physicist mate Fritz how it worked.  Fritz was not impressed with old brush-motor technology and propeller design and told him so.  As he seems to have a habit of doing, Christoph challenged him to do better—and what we have now is the efficient Torqeedo motors.  And now it seems the challenge from Christoph is to be able to go on adventures with his family at 30km/hr on the lake. With the help of Max’s boat, light powerful batteries and a new prop, perhaps Fritz can do it.