Torqeedo Starnberg— the two words of the Torqeedo logo.  And if you’re like me you’ve never heard of Starnberg until Torqeedo came along. And here I am with Claude at Starnberg. It sure is cold here, coming from an Australian summer. There’s pockets of snow lying around, and just a few days ago there was still ice in the lake.

We’re here for training for service for a few days and to get to know the people at Torqeedo.

Also at the training are Torqeedo dealers from Finland, India, Belgium and the old East Germany.  Luckily for me the common language is English—the others are all multi-lingual, and the training was conducted in English. 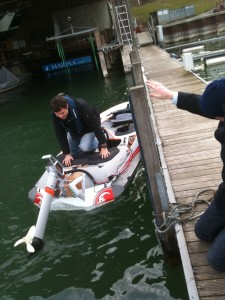 Daniel setting up the Cruise 4 on the MarineKart

Starnberg is beside a freshwater lake of the same name, and is a holiday and recreation destination for the folks at nearby Munich. One afternoon was dedicated to trying out the various Torqeedo motors on variety of boats.  You may already be familiar with the carbon fibre Aggressor which was built in Australia by Max at Gold Rush Boats on the Gold Coast.  I was able to reach 26 km/hr in this boat.  But only for a nanosecond you know, because I immediately slowed the boat because I’m not used the cold.  Coming as I did from Sydney where only a few weeks ago it was 42 degrees. You can see more about this boat in a previous blog entry.

I was also keen to try out the Marinekart—a slick little runabout that performs well with the Cruise 4.  In previous tests the guys at Torqeedo had used a short shaft Cruise 4 and this time wanted to try a long shaft, wondering if the performance would be better.  With the short shaft, speeds of 26 km/hr were obtained we were hoping to beat this…

Unfortunately we ran into trouble with the prop cavitating and didn’t see much over 20 km/hr before cavitation started.  Well, technically its ventilation, but its commonly called cavitation. Its caused by air being drawn down to the prop and mixing with the water and dramatically reducing the thrust in a sudden way.  Its weird to me though that its the long shaft model that suffered the problem of ventilation. 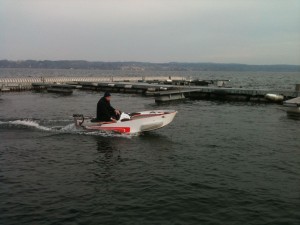 When I drove this boat I could get it up on the plane and it would begin to accelerate and I saw speeds of low twenties before the ventilation started. The loss of power was quite abrupt as the ventilation started so its a pity we didn’t get to plane nicely.  I’d like to keep tabs on this boat and see how it goes when the guys at Torqeedo get the recipe right for setting this up best.

The Marinekart weighs only 50kg and has some clever features. The steering arrangement is effective and allows easy tilting of the motor without having to adjust the steering in any way.  It includes a telescopic tiller arm which changes its length while steering ad while tilting the motor. It may not look it from the photos but this boat can carry up to four people, the open area in front of the helmsman can take three people.  But I guess it would be best suited to one or two people and some gear. It would make a nice fast tender for a cruising yacht. 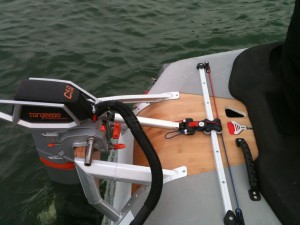 Its worth taking a close up look at the steering of this boat and you can see from the photo on the left the details of it. The steering uses dyneema lines through a pulley system to the steering wheel. And I think the Cruise 2 would also be a good match for the Marinekart. Especially with a single Torqeedo Power battery it could be a good performer.

We also had a couple of other boats to try out the Cruise 2 and the Travel 1003. I tested the 1003 with both the two-bladed standard prop and the three-bladed prop normally used on the 503 and the 801.  The dinghy we tried it on is a Tehri from Finland which is quite fitting because we had with us Otto and Håkan from Finland.  Despite having only a few months of warm weather, and months of frozen lakes, the Fins are keen boaters and make the best of what time they have available. 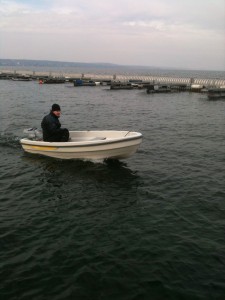 Otto in the Tehri dinghy

But back to the tests…  with the two-bladed prop I saw 9.2 km.hr and with the three bladed prop I could get to 10.4 if I positioned myself well in this dinghy.  By getting the balance just right, that extra knot of speed is available. I expect the two-bladed prop would still be the best choice for this boat for regular use where it would be carrying a bigger payload such as two people and their gear. The three bladed prop should only be chosen where the boat would be only lightly loaded and it is to travel at full speed.

The other trial horse is a catamaran style dinghy and it was fitted with the Cruise 2.  In this dinghy I could get to a speed where it was on the verge of planing.  Not quite at that sweet spot when it gets properly up on the plane and the power needed is less.  The Cruise 2 does not have a built in GPS like the other motors tested so we did not have a speed reading for this combination.

The rest of the time was spent at training for servicing the motors.  The interesting thing was to see how they respond to issues that need attention and how in the newly released 1003 there are some subtle changes which improve some details of the design.  For example the tilt lever has been made stronger.  For most users the tilt lever is fine as it is, but if the motor is left attached to a dinghy and it is loaded on a trailer and transported on a bumpy road, the motor can bounce and the tilt lever can be bent. 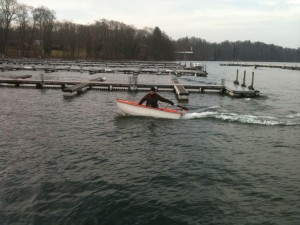 Erik from Belgium putting the Cruise 2 through its paces

And related to this is the quality control technique of continuous improvement—something espoused by the doyen of quality control, W Edwards Demming, whose guidelines they follow.  Demming is perhaps best known for his work in Japan from the 50’s and he is credited with transforming the quality of Japanese industry. I’ve been an admirer of Demmings work for many years now and I’m encouraged by the Torqeedo management style and the way the organisation embodies many of the Demming principles.