Ultralight motor on the back beam

Getting becalmed for a couple of hours in Darling Harbour on a Hobie Wave catamaran can get you the unwanted attention of impatient ferry captains. That’s why Lakshman decided to get an Ultralight kayak motor and have it mounted on the aft beam of his cat. And with a weight of only 7kg it would not be detrimental to the sailing performance.

Our mission was to come up with a way of installing the motor on the beam and stashing the battery in one of the hulls. 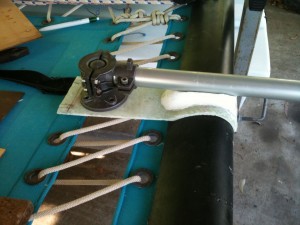 Mal came up with the idea of making a clamp, somewhat similar to the clamp used by the Torqeedo 801 to connect the transom bracket to the shaft. The appeal of using some kind of clamping arrangement is that the beam does not need to be drilled. It also gives the freedom to mount the motor anywhere across the back beam, although I expect that centre mount would be the preferred option. 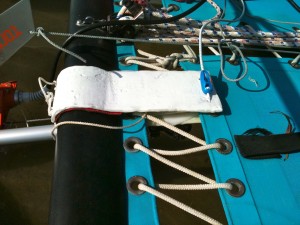 The bungie at right end lashes through the trampoline eyes.

For me a glass-epoxy composite is an easy material to work with—the nice thing is that I can use the beam itself as the mould to make sure the bracket is a perfect match for the shape of the beam. I used kitchen cling-wrap on the beam so the epoxy would not stick to it while forming the shape.

Two matching clamp halves were made in this way—the lower bracket takes the ball joint and has an additional pad to give extra support to the mounting arm. By putting the mounting arm underneath the beam, it places the propeller as deeply in the water as we can get it without using an extension. 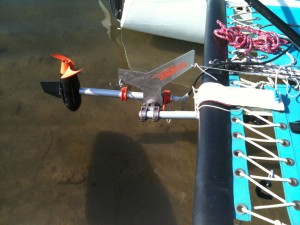 Ultralight in the raised position for sailing

The clamp needs a hinge to flexibly join the two halves and I used a rope hinge that is used on Wharram cats. The other end of the clamp is held together using bungie cord which means it only takes a few moments to attach or remove the clamp. The bungie cord lashes through the eyes of the trampoline.

The “tail wing” device on the Ultralight is to allow attachment of lines to raise the motor when sailing, and to hold it down for going astern. Cleats for these lines are included in the Ultralight package but in these photos they were not fitted yet. 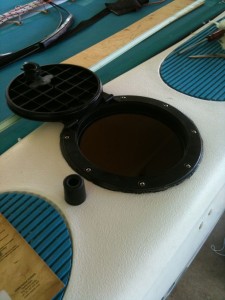 Hobie make an 8 inch waterproof hatch which is just the right size to pass the Ultralight battery so I fitted one of these to the port hull. I built a plywood shelf with lips to retain the battery in the event of a capsize—the shelf is glued to the inside of the hull using a flexible adhesive.

The power cable is passed through the hull with a rubber bung around the cable that allows a good waterproof plugging of the hole. The perfect rubber bung is a rubber doorstop from Clarke rubber—it has just the right diameter and a nice shallow taper that makes it easy to get a tight fit.

The control cable is also passed through the hull using the same method, and using a smaller diameter bung—also from Clarke Rubber. 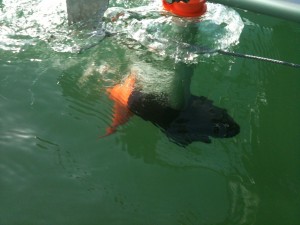 Before delivery I did a sea trial to confirm that the propeller is deep enough and that it works as planned. The Hobie Wave seems a very low drag hull configuration and at 60 watts it is travelling at around 2.5 knots.  So even with the limited size of the Ultralight battery that would still provide almost 4 hours of travel at this speed.

I was not able to properly test it under full power because the prop easily ventilated due to a pocket of air following along behind the motor support tube. Top speed reached was 3.8 knots while drawing 260 watts of power. As soon as the ventilation occured the prop lost power due to pushing aerated water, and it prevented the motor from delivery the full power available (400 watts). This would be improved by making a foil shape around the tube to eliminate the air pocket, and just to be sure, I think a cavitation plate would also help. (And for the technorati amongst us, this is indeed an anti-ventilation plate). I plan to make a foil and cavitation plate soon and it will be interesting to see how much difference they make.

It surprises me that Torqeedo do not provide some sort of foil that can be adapted to different installation depths. It is known to make a useful difference in speed. 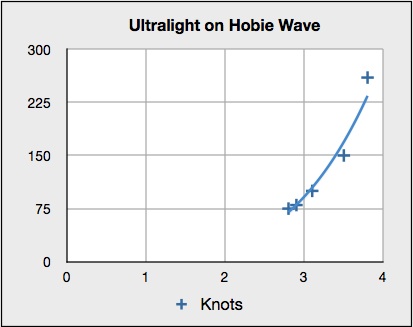