Scott and his son in the Quintrex 3.7 on first trial

A couple of weeks ago I took a Cruise 4 to Denjera Dam in the Nowra hinterland for some Bass fishermen to try it on their boats. Danjera is a water supply dam and its only permissable to use electric outboards (or row!).

This was arranged by an existing customer, Ed, who has a Base Travel on his punt and some of the other guys have become interested in checking out the other motors as well.  So I brought along a Cruise 4 on the Saturday afternoon before their fishing comp the next day. By the way, the two photos here are courtesy of Ed and the only ones I have.

We tried the Cruise 4 on a Quitrex 3.7m cartopper.  For the first trial and in the photos here it was carrying a a couple of extra deep cycle batteries normally used for the trolling motor on the bow. I recall the speed here was about 14 km/hr.

After removing the two spare batteries – maybe 60kg, and changing to driver only, we saw higher speeds, and up 16.7 km/hr when we got the balance right, and the motor trimmed better. At this speed the boat was just planing and the motor was drawing about 3700 watts.  This is less than full power. 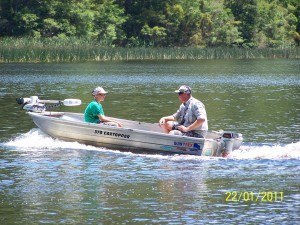 The motor used here is the one from my boat Current Sunshine, and I know at full throttle is can pull over 5200 watts, so we know that it had another 1500 watts of power still available.  This is because the prop has reached full rpm and the motor is programmed to not exceed this speed and so the power is reduced to whatever is needed for this rpm.

So it will be interesting to try this test again with the speed prop because we know the motor has another 1500 watts available to use on a higher pitched prop.  I wonder if we can get it to 20 km/hr?

The Cruise 4 shown here was using four Optima 55 ah batteries that weigh in at about 18kg each.

This setup was also tested on Dave’s boat but it had a deeper transom and this short shaft model was indeed too short.   The prop started ventilating at about 8km/hr and the maximum power required was only 2000 watts.  There was too much air mixed in the with  the water to get any decent thrust.  So we will have try again another day with a long shaft model…