Looking for a slipway that can haul Current Sunshine I went exploring around the southern end of Pittwater. With a Travel 1003 on a Zodiac I can ghost along at rowing speed all day.  A measely 50 watts of power gives me about 3km/hr which is gentle travling for sure but I can do it for 8 hours on the one battery.

It was a good opportunity to hand out flyers to yachties working on their boats.  Its an ideal way to promote the outboard cos its right there on the dinghy and its available to try out there and then. And I nice excuse for me to be mucking about in a boat.

Lovett Bay boatshed is an old-fashioned kind of boatshed with two slipways and enough room either side to be able to clear Current Sunshine’s floats.  I’ve left measurements with the boatshed and its looks like it could be possible to haul her out here.

On the return journey I still had 80% of the battery capacity remaining so I picked up the power to 100 watts and soon after that a southerly change came through.  Southerly’s around here come in very quickly and blow quite strong in the first 15 minutes. This one was fairly benign and the wind was mostly around 20 knots with occasional gusts to 25-30 knots for just a few seconds. Even so the sailing boats racing were suddenly tipped over on their beam ends and were busily reefing madly flapping sails. 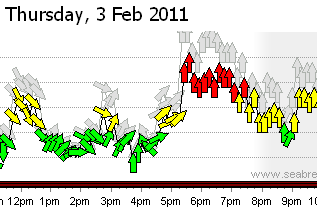 In the stronger gusts the power setting at 100 watts was not quite enough and the wind could knock the bow off track.  But giving it just another 50 watts was all it took to steady the zodiac again.  At this power the inflatable was making about 3-4 km/hr and that was just about as fast as I needed to go. Even at that rate I was getting soaked every few minutes from a bigger than normal whitecap.

In all I was pretty impressed with how it pushed against this breeze without a lot of power.  Even into this wind I had enough battery power remaining to go for a couple of hours.