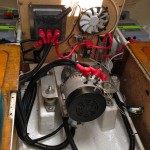 Seems like I have been banging on about stock shortage for too long now and so its time to talk about batteries instead.  Steve Williams has just installed an Electroprop 5kw motor powered by a pair of Torqeedo Power 26-104 batteries on Echo, and Endeavour 26. Steve sails out of Geelong so I took a trip to Melbourne to commission the motor.

Well, the commissioning really took no time at all, and really was more about confirmation that the sizing we chose with advice from James Lambden of Electroprop was spot on for this boat.  The propeller and gearing gave the performance we were expecting and the controller settings chosen by James resulted in a low peak current and good acceleration, so we didn’t need to do any tuning.

The Torqeedo batteries have a maximum current draw of 180 amps and I was particularly interested to make sure we didn’t exceed or come close to this threshold. The Power batteries have a circuit breaker which will trigger at this current and so its important not to exceed this because it will shut down the batteries.  This could be awkward if a shut down were to be caused by full throttle to get out of danger.  So I was pleased to see the maximum current was around 100 amps for full acceleration and even in an emergency stop from full forward to full reverse the maximum current is only around 60 amps. So we plenty of amp capacity well in excess of what this boat will ever need.

With the pair of Torqeedo 26-104 batteries the Endeavour 26 has a range of around 5 hours at a cruising speed of 4 knots. Steve’s original target range was 15nm at 4 to 5 knots and so we’ve matched that nicely. The Torqeedo batteries were chosen primarily because of their light weight and extensive protection.  The pair of batteries have an all-up weight of 50kg and just by way of comparison a similar capacity pack of good quality AGM batteries would weigh in around 300kg depending on the depth of discharge allowed.

The Torqeedo batteries are true marine batteries with the automatic disconnection of the power to the terminals in the event of submergence. 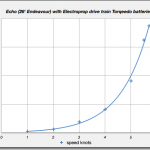 It was a delightful morning on Corio Bay and with very light winds we had the perfect conditions to test performance and so I have done some speed/power curves for this boat as shown here.

Lithium batteries, such as the Torqeedo Power 26-104 are well known for their light weight and compact volume, compared with lead-acid batteries. What is less well known are other advantages they can offer, related to depth of discharge and efficiency of charge and discharge.

Allowable depth of discharge of the Torqeedo battery is 100%, which can be done on a regular basis, and this is very unusual for a battery to support such depth of discharge. This means that the full rated capacity of 2685 Wh is available for everyday use.

Watts in a name

Beware of directly comparing a Torqeedo battery with an AGM battery that seems to have a similar rating.  Because the Torqeedo battery is listed as a 26-104 battery, it is declaring its voltage and capacity as 26 volts and 104 ah.  You might think you could compare this with, for example, a pair of FullRiver DC-105-12 batteries.  As indicated by the name, this would be a 105 ah battery rated at 12 volts.  By getting two of them and connecting series  you would surely get a 24v battery of 105 ah.  And this seems to be similar to the Torqeedo rating.  Or does it?

And here’s where we need to look more deeply and read the fine print.

We know that on Echo, Steve wanted to be able to run for 3 or four hours at 4 knots, or thereabouts, and the range with the Torqeedo batteries is 5hrs at 4 knots.  So this means the full capacity of the battery could be discharged in that time.  Recall that the capacity of the DC-105-12 is rated as such for a 20hr discharge (as do most other AGM manufacturers).   Fullriver also lists on their website the 5hr capacity for their batteries, and this one is rated at 86 ah. 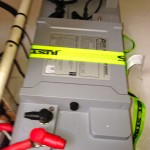 The battery we really need to make a similar comparison is a DC-140-12 which has a 5hr rating of 115 ah.  Its mass by the way is 43kg and we need 4 of them which is 162kg.  This is heavy enough, but there’s more to consider yet.  To use this capacity would mean discharging to 100% of rating and that is not recommended, even for deep cycle batteries.  We need to consider the depth of discharge recommendations and these vary depending on who you ask.  Here what Wikipedia says on this topic:

A deep-cycle battery is designed to discharge between 45% and 75% of its capacity, depending on the manufacturer and the construction of the battery. Although these batteries can be cycled down to 20% charge, the best lifespan vs cost method is to keep the average cycle at about 45% discharge. There is a direct correlation between the depth of discharge of the battery, and the number of charge and discharge cycles it can perform

If we take a conservative approach to the battery design, we could choose 50% depth of discharge.  In this case we would need an available 5hr capacity of 208 ah to be equivalent to the usable capacity of the Torqeedo battery.  Looking again at the Fullriver website, a suitable battery would be a DC-260-12 which has a 5hr rating of 213ah, which is close enough to the target of 208.  The fullriver DC260-12 has a mass of 77kg and four of them would be 308kg.

Try lifting a 77kg battery into your boat!  This may not be a practical alternative and to get a useful equivalent we may need to consider 8 or 12 batteries of a smaller size, such 12 x DC-85-12.  The DC-85-12 are 25kg each (similar to the Torqeedo) and for twelve of them would be 300kg.  Such a pack introduces other complications such as where can you find space on a 26ft Endeavour to place 12 batteries of this type? Inevitably the solution involves compromise and perhaps you will choose to allow a greater depth of discharge and try to get away with just eight of them.

It’s these kinds of dilemma’s that can be avoided by choosing the high energy Torqeedo Power battery. 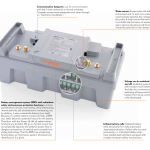 Another important consideration for use on a boat, or for other remote standalone power, is how does the battery perform when charged by solar?  There’s two features of Torqeedo Power battery that are critical in a solar application.  The first is to do with loss of capacity when a lead-acid battery is kept at less than full charge, and the second to do with charge efficiency.

Degradation at low states of charge — this is a problem with lead-acid chemistry but not a problem for lithium batteries.  An issue with solar charging is that after a trip the battery may be at quite a low state of charge, say 30%, and the weather may be overcast or rainy for many days after which does not allow the battery to recharge right away.  This is destructive for lead-acid batteries and will reduce their life.  With lithium batteries they are chemically stable at intermediate states of charge, and do not degrade at low SOC.

Charge efficiency factor — a lead-acid battery may have a charge efficiency factor 70 to 90% depending on manufacturer and type of construction.  This means that not all the solar power that is generated can be stored in the battery.  Losses of 10 to 30% can occur, and this effectively means solar panels charging a Torqeedo battery deliver 10 to 30% more energy to the battery, which is then available for use in powering the boat.  On a boat where space to mount solar panels is scarce, this loss of power is critical.  This aspect is rarely considered by solar designers, and is an economic and practical consideration that effects the usability of such an installation.

At first glance the Torqeedo battery may not seem like economic solution and yet it offers so many advantages, that it becomes the only practical alternative for many boat and remote power applications.  As well as the topics we have discussed it has remarkable cell protection to ensure the reliable life of this battery and that it is protected against overcharge, overcurrent, submersion and more. 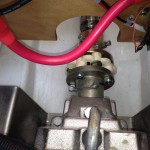 The pristine white bilge of Echo

Electric propulsion in boats makes for a very clean below decks installation.  The motor does not drip oil and the battery does not give off toxic fumes. These two features make for a very clean bilge — take at look at this photo from Echo.  This engine room will remain pristine and white and making the inside of this boat a very nice place to be.

In the past, going below has meant sharing the space with a smelly diesel.  If it means the the difference between your lover wanting to join you on sailing expeditions, or not, going electric can turn your boat into a place of joyful shared adventures.