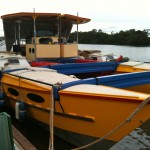 Hulls and beams newly painted - and take a look at the pod coming along...

Tarci and Sue’s Wharram 38 is beginning to look schmick after its new paint job – and what friendly colours they’ve chosen.  Well, Sue really. They have some really innovative plans with this boat including being able to easily beach her which will make the entire coast their cruising ground—not just the harbours and anchorages that most of us restrict ourselves to.

Today though I have some photos showing the lithium battery installation in two battery boxes— one just ahead of each motor. Tarci has two banks of 200ah at 48v as well as a 200ah 12v house pack – each of which consists of a series of 3.2v Lithium cells. These cells are the same type as I have for my main pack but twice the capacity. 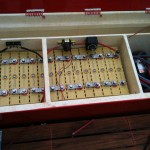 After all, he does have two motors so it means the capacity per motor is the same as mine.  So at full speed he’ll have about two hours range.  But the low speed range should be even greater than for my boat.  By running just one motor at a low wattage – say 1000 watts – Monkey-Me will likely move along at 2-3 knots and be able to do this for about 16 hours.

We’re hoping to be able to do sea trials in the next few weeks and then we’ll know for sure what speed is available at different power settings.

Similar to my setup on Current Sunshine, Tarci and Sue will be relying on solar and wind power to recharge the batteries in everyday use.  And for emergencies they’ll be carrying a small Honda genset that will be able to recharge the pack at times when there is no wind or sun, or a faster recharge is called for. 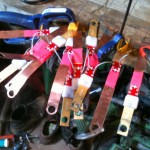 Soldering the daisy-chain wires to link the cell protectors together

The cell protectors are wired together in a daisy-chain pattern and when the voltage of the cell is ok, it completes the circuit through all the cell protectors. If any one of the cells goes under or over voltage the circuit is broken and a warning system is triggered. The warning system can be simply just an alarm for the skipper to respond to, or it can include a relay that can remove the load, or the charging source to protect the cells. For charging, I prefer the relay option. But for load alarm I prefer to leave it to the skippers discretion—because who knows, right at that time there could be a critical navigation requirement that prevents you from shutting down the motors. Under some circumstances I could see myself making a choice to keep the motor running and run the risk of destroying a cell. And I’d like to have this discretion rather than have the power shut off unexpectedly at low voltage.

Mind you, with the other monitoring and warning systems in place, such a low voltage situation should not be unexpected. 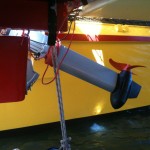 Motor will be raised and locked down with ropes - in keeping with the Wharram style.

Each bank will be attached directly to a Cruise 4 mounted immediately behind and below the battery box. The length of cable will be very short and less than the standard length. As well there will be a cross connection between the two banks so that either motor an be run from either bank.

Each motor is mounted on the back of a vee-shaped pod which pivots at the front end to lower the motor mount down closer to the water. The tilt lock mechanism will be removed and substituted with a rope system to lock the motor down for reversing. This is so that it can all be done from the cockpit rather than having to reach down in an awkward area below the bridge deck.