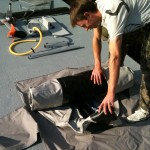 What is all this stuff? David with the makings of an adventure.

You’ll be intrigued as me by the hydraulic steering that David has set up on his SeaEagle kayak and how we combined it with the remote throttle to make a really user friendly rig.  As well we’ve done more comprehensive propeller comparisons and I’ll have some graphs to show later. All in all it was a fun way to spend Sunday afternoon—mucking about in boats.

David arrived at the Torqeedo Shop with his car loaded with interesting bits and pieces of mechanical creativeness.  He is, after all a machine fitter, and you’ll see that becoming clear as he puts it all together for us. 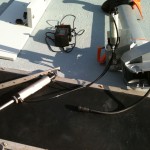 Rams recovered from disused equipment and adapted for hydraulic oil.

Here’s the parts for the hydraulic steering laid out on the dock so you’ll begin to see how its put together. David has access to machine tools and the skills to use them and so has been able to machine some parts to make it easy to attach to the Torqeedo frame without harm. [warning – don’t try this at home – you may void your warranty!] 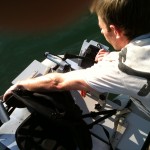 You may remember from an earlier post that the steering position with the tiller right behind the pilot was awkward and David has been scheming ways around this by using his ingenuity. To begin with he made an offset adaptor to relocate the tiller to a better position…  but hey, that’s a whole different story for another day.  So this scheme is the second generation of steering devices for the SeaEagle. 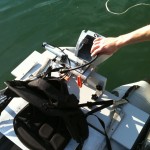 Another view of the steering ram attached to the 1003

The main elements of this hydraulic steering are two bidirectional rams linked together with flexible pressure hoses.  One is mounted on a specially designed bracket to suit the head of the 1003, and with its linkage gives a steering range of 25 degrees either side of centre. David is wondering if this will be enough range to give a tight enough turning circle. 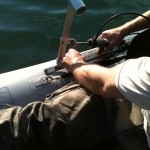 As well as testing the steering mechanism, we also wanted to take some detailed readings of speed and power using the standard 2-bladed prop and the 3-bladed prop from an 801. There had been a westerly gale blowing this morning and by now the wind had dropped to about 15-20 knots and we figured we could find enough protection in Crystal Bay for our tests. The results of the prop testing are detailed and will be the subject of another post a bit later.

Testing in Crystal Bay was also good for manouvrability assessment because of all the moored boats. The range of steering was enough even for steering in amongst the moorings without worrying about not being able to turn hard enough. I had a turn in the pilots position and I am really impressed with the smoothness of its operation.  As well, being hydraulic the steering stays locked where you leave it.  With the tiller steering, if you let go of the tiller, wave action and so on can easily move the setting. In all this is a very nice rig and really responsive and comfortable to control. And when combined withe right choice of prop it makes a versatile adventure incubator.

Forward=left back=right forward=faster back=slow. To much similar information for the mind to manage easily. When you need to turn, and at the same time concentrating on setting the throttle, which has the same movement, was confusing.  But we expect that after a while it would become a kind of auto response, without needing to engage the mind, and then we think the direction would become second nature.  Only time will tell…