Which propeller should you use on the 1003?  Did you even know that you have a choice?

The standard prop that comes with the 1003 is a two-bladed one that is optimised for speed and power for the vessel that Torqeedo expects most users to have.  Thats a result of their market research and really, its what the average user would choose.  Common uses are to drive dinghy or a small sailboat.  And for most of the boats in these categories the two-bladed prop would be the best choice.

But we were wondering how would it be for an easily driven hull such as the SeaEagle kayak, which you may have seen in previous blog entries here and here?  So on a recent Sunday afternoon David, the owner of the SeaEagle and I did some tests to judge how the three-bladed prop normally found on the 801 would perform on the 1003.

These motors have the same drive shaft details which means the propellers can be swapped easily using just a socket spanner.

The day planned for the trials dawned with a westerly gale in full force so we delayed our tests till the afternoon when the wind was expected to be lighter.  At the time of testing the wind was around 10-15 knots and we tested with the wind on the beam to minimise its influence, and we stayed in Crystal Bay in front of my office where it is well protected.

We did a pass in each direction as well, just to minimise any downwind assistance we may have inadvertently picked up by not being exactly beam on.  So here’s the results plotted up and curve fitted to make it easy to compare the two sets of data. 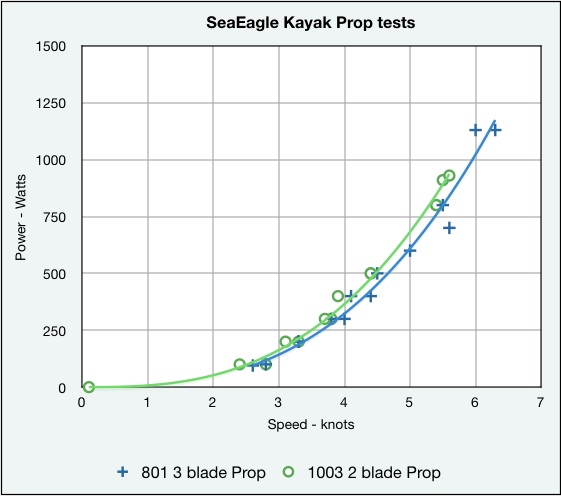 The blue line is the 3 bladed prop from the 801

You can see from this that the 3 bladed prop is easily better for this boat – its almost a knot faster going from a top speed of 5.4 knot with the standard prop to 6.3 knots with the 3 blader.

Do you notice how it effects the power demand? See that at a particular speed the 801 prop uses less power to reach the same speed.  So its clear from this that if you have a SeaEagle kayak you’d choose to get a spare prop for the 801, and fit it to your 1003.

I expect that this same advice would apply if you have a 1003 on any easily driven hull.  And one way of telling how easily driven it is is to look at the maximum wattage when you have the motor at full power.  If full power is less than 1000 watts, chances are that the propeller is runnning at full revs, and that is the limiting measure. That is, the motor has ‘red-lined’ without having to deliver full power.  So it has more power ‘up its sleeve’ and its this power that we can use to drive a higher pitched prop such as the one from the 801.

These results match the calculations you might do based on prop pitch. If you delve into the specifications you’ll see that the three-bladed prop has a pitch of 10 inches, and the two bladed prop has a pitch of 8 inches.  Thats 25% more pitch – so we’d expect it might be able to go faster, provided the motor has the power to spin this prop.  And because we know its its not demanding full power for the standard prop,we know it does have some spare power available.

How much faster can it go? What about the speed prop thats available for the Cruise 4? David and I have been speculating about an adaptor to be able to fit the speed prop from the Cruise 4….  but, hey, thats a test for another lazy Sunday afternoon.