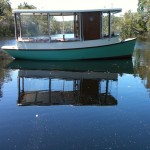 On the Upper Noosa River

Come and see the Sienna solar boat at King George Square in Brisbane this Saturday 28th October as part of the National Electric Vehicle Festival. This festival is part of the National Electric Vehicle Convention and you can see more details of this at the website here. The builder’s of the Sienna, Scruffie Marine, will be on hand to answer any questions you have about the design and building of the boat or how you might have one built for you.

Unlike most electric vehicles this one is totally solar powered for its normal use. Its not built as an experimental vehicle, such as you see in the solar car race from Adelaide to Darwin, but built for everyday use to be powered by the sun. The solar power is not only use for propulsion but also for running the other electrics such as the fridge and lights as well as small fan for the composting toilet. It will be used in service as a rental boat at Pittwater and we are taking bookings now for December and January.

Using solar power alone, that is, not taking anything from the batteries, she can travel at around 3 knots. This is the perfect speed for quiet rivers such as the Noosa and the Caboolture. Using battery power she can travel all day at 4 to 5 knots.  From tests so far we expect the energy from one days solar power will be a close match for the energy required for a typical afternoon or morning outing on Pittwater. 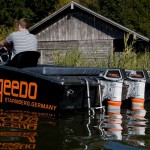 Also on display with us will be the carbon composite planing eletric boat of Gold Rush boats from the Gold Coast. Max Buener, the designer and builder will be on hand to describe the details of this environmentally friendly speed boat. Noy only is it electric powered but its green credentials extend to its construction. The composite has a core of cork which is a renewable product and the epoxy resin used in its construction is sourced from renewable materials. This boat has been awarded the world’s most environmentally friendly boat because of its construction material and propulsion system.

Torqeedo Australia will also be at the festival with us and will be on hand to answer  questions you have about electric propulsion for boats.

We’ll also have information available about the Electric Boat Association and you can see more information about this group at the website.