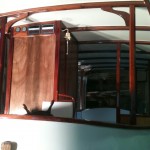 Here is the skipper's area of the Sienna

This project has been occupying my attention since March when I somewhat spontaneously decided to go ahead with it.  I had been looking at various boats with an eye to finding one suitable for rental, but I hadn’t seen anything I liked when my friend Claude (Torqeedo Australia) told me about Scruffie Marine’s solar boat. And it took only a week or two of vacillating over it before I took the plunge and ordered one. I did the requisite due diligence on the back of an envelope while at breakfast one morning in hotel at Starnberg where I was with Claude for training at Torqeedo.

And now three months later she’s almost finished. I’m now back at Mount Tamborine to install the batteries, solar panels and electrics and then in a couple of weeks she’ll be ready for launching.

I have spent maybe a month at Mount Tamborine so far helping with the construction of the Sienna and have enjoyed it immensely.  Derek is a master craftsman and it’s wonderful to see up close his attention to detail in his shipwright work and also seeing his design come to life. In small boat design and building businesses such as Scruffie Marine there is no budget for the luxury of prototypes—the design has to be right the first time. And so it is with the Sienna. Look how she’s turned out. 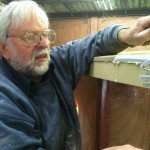 Derek using the traditional woodworking tool, the draw knife, for shaping the canopy

The paradox of Sienna is the mix of new an old reflected in many aspects of her makeup. The blend of a traditional easily driven hull, evolved from centuries of fishing boat use, is matched with a state of the art electric motor to maximise efficiency. Contemporary marine solar panels are mounted on a canopy that is strengthened using timber knees carefully chosen so the grain matches the lines of force, just as it has been done by generations of wooden boat builders. This mix of new an old is nicely highlighted in this photo of Derek using a drawknife on modern materials.

(More importantly some might suggest, the drawknife is a critical tool for hand made cricket bats.)

Sienna will be available for hire in Pittwater from October and on the week of the launch we’ll be offering special rental deals for those who get in early.  So if you’re thinking of spending some time in Sydney after October why not include an afternoon cruise in the lovely Sienna solar boat.  Keep a watch on the blog for when we release the booking sheet at special intro prices.