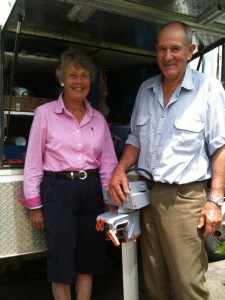 Tim and Jocelyn with their new Torqeedo 1003

It took just a quick test drive of a Torqeedo on the Zodiac around Crystal Bay to convince Tim and Jocelyn that a Travel 1003 would be ideal match for their inflatable dinghy which they carry in their motorhome. Well, its not really a motorhome—with 1500 watts of solar panels on the roof its a mobile power station! (Take it from me, thats a lot of power—my yacht, Current Sunshine has only 460 watts and on sunny days its quite enough but rainy weather it struggles. With 1500 watts, they don’t have to skimp even on the cloudiest of days).

They’re travelling south just now and next year they’ll be joining the winter migration that happens each April as the grey-nomads head for northern Australia’s dry season. 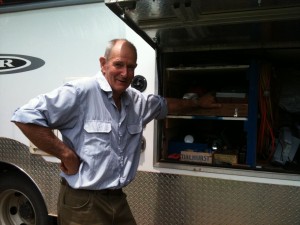 Tim has had to downsize his shed— but he still found room for quite a kit of tools.

On board their RV they carry a folded inflatable dinghy and want to be able to explore the pristine rivers and billabongs they come across in their travels.  So the Torqeedo 1003 fits the bill nicely.

It has a lot of advantages for this kind of travel and can be easily recharged by plugging into their on-board inverter. This makes the Torqeedo a solar powered motor because the charge will come from their battery bank—because they have plenty of solar panels they never need to plug into mains power. 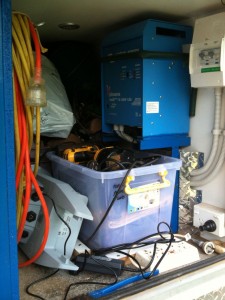 Not having to carry petrol for the outboard appeals to Tim because the motorhome is diesel powered. And the electric outboard cab be stowed anywhere in the RV that there is a suitable space.  Because it is clean and slim, it can easily be stowed in a cupboard with linen or other domestic items that would not want to be in contact with a smelly petrol motor.