My friend Deb was visiting and it felt like whale watching my be a nice adventure for a Sunday morning. Because Current Sunshine is incapacitated just now we had to take the Zodiac.  So I loaded it up with four optima batteries to power the Cruise 4, a few apples, water and went in search of humpbacks.

We launched at the back side of Palm Beach so its not too far out through the heads of Broken Bay. There was a light wind from the west expected to go north east in late morning. The sea was a gentle easterly swell with the sun sparkling the water.

As we moved further from the land we wondered how scary it would be if a whale breached right near us. After all the zodiac is only about 3 m long  and a whale could be ten times this size.

It was a lovely day for whale watching, but after an hour and half of heading towards New Zealand. not a humpback was sighted. We turned for home, content to have enjoyed a pretty nice morning in the dinghy.  It was nice to be going along quietly at about 2 or 3 knots.  At that speed it doesn’t use much battery power and on such a gentle sea it seemed the right speed.

We were almost inside the heads when I spied something big slipping back into the water just to the north of us.  It surely was a whale…   I changed course a little towards its course to see where it might surface again and just trickled along in silence at about a knot and then stopped.  The minutes ticked by and nothing.

Then woosh – she blew right beside our little zodiac.  She was about 15m from us and ever so gently she curved back under the waves.  She came up again nearby a few more times and she seemed in no rush. But we were joined by a power boat which followed her – and we joined too for about half a minute but it felt too much like we were chasing her so we left her to journey.

The most amazing thing is how unscary it was.  The whale felt so gentle and I’m sure she knew we we there and that we had just come to visit her.

And now for some technical stuff…

On the way out and when coming back we tried it at different speeds to to see how it would perform with quite a payload.  The batteries are 80 kg and the motor is 17kg and it brought the payload weight up to 230 kg and I think this is about the maximum for this inflatable.

At full power we could get it to plane but it was dragging quite a tumbling wake and so I expect is quite innefficient. At full throttle we could do 6.1 knots and the power demand was 4100 watts.  This motor will pull 5200 watts when prop and boat characteristics are well matched.  So we didn’t hit the sweet spot.

Using the Travel 1003 on this dinghy, and with just me on board, I can just get it to plane at 5.1 knots and its using about 1100 watts at this speed.  So clearly the extra weight of the optima batteries and an extra person is significant. It would be nice to do some more tests with the 1003 but I don’t have it here at present.

Here’s a graph of the heavily loaded Zodiac… 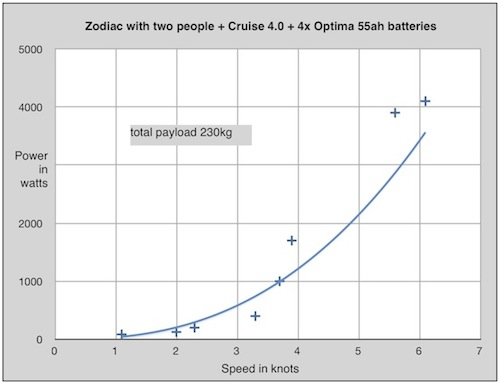