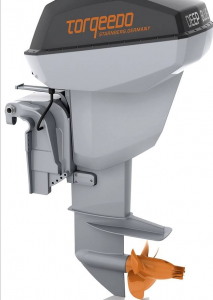 Amsterdam 12th November 2012. Torqeedo GmbH is declared the overall winner of the Design Award Marine Equipment (DAME) for its groundbreaking work on its new powerful electric outboard, Deep Blue.  At a breakfast briefing before the opening of the METS trade show the DAME Jury announced the category winners and the overall DAME award winner.  Here’s what the Jury had to say about Torqeedo’s efforts:

“The Jury believes that the new DEEP BLUE large electric outboard from Torqeedo GmbH is an exceptional example of groundbreaking research and development – one which will bring great benefits to both the users and builders of marine craft. Through substantial financial investment Torqeedo have successfully combined two established yet distinct technologies – the large outboard engine and electric motor – for the first time. In doing so they have created a revolutionary integrated
propulsion system that is striking in its styling and highly notable for its innovation. In bringing this truly original product to the marine market, DEEP BLUE’s designers have achieved a first-class package that offers convenience, price worthiness and performance. It also promises to provide a cleaner, quieter and more economical boating experience for many people in the years to come.”

The DAME Jury inspected 115 products from 25 countries and then nominated 39 products to advance to the second round of judging. Only products that made it to the second round were considered for the DAME Award. In determining the winners in seven categories, as well as the Overall Winner, the Jury took into account a number of factors, including design, styling, quality of construction, overall impact on the marine industry, suitability for its intended purpose, level of innovation, cost effectiveness, and favourable environmental impact. Those products that made it to the final round and came close to winning have received a Special Mention in their categories.