Pittwater to Sydney by solar power 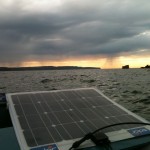 Low cloud and passing rain scuds - and a lovely sunrise

Overcast with passing light rain was not what we had in mind for a solar powered journey. Maybe I’d be rowing after all…

We left on the mother ship about 5.30am and towed the solar powered zodiac to the start point at Station Beach, at the back of Palm Beach. I boarded the Zodiac at 7.45am and we started the log to track our progress.

Claude was skippering the mother ship which would shadow me the trip and to be there as a backup in case I needed assistance. The expedition photographer travelled on the mother ship and I have yet to get a copy of those photos.  So what you see here is taken by me from the zodiac. 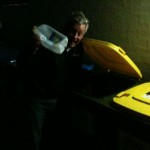 I’m hoping that I can make it from Pittwater to Sydney with one battery on a 1003 and assisted by solar panels velcroed onto the Zodiac. We reckon the distance is about 20 nautical miles from our start point to Little Manly Cove in Sydney Harbour. The battery weighs 4kg and has 400 wh of energy—enough to run a household blender for a half hour.

My get of jail free card is the flexible solar panels which we hope can provide the majority of the power needed for this journey. The solar panels are 40 watts each (that’s under ideal conditions) and with four of them I’m hoping that it can provide the energy needed to travel at around 2 knots or more.

Coming out of the heads at Pittwater I’ve already used 11% of the battery and the speed is a slovenly 1.6 knots. The display screen on the Torqeedo shows that the battery will be empty after 7.1 miles at this rate of progress. The oars in the bottom of the dinghy make it difficult to find a comfortable seating position… 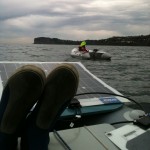 I'm comforted by my view of the mother ship close by

Its kinda cool and the passing rain scuds encourage me to dig out the wet weather gear. On the mother ship Claude is also donning the wet weather gear. We’ve come around Barrenjoey, the sentinel of the entrance to Pittwater, and now the few knots of wind are behind us and helping us on our way. The speed has picked up a little to 2 knots—if the battery could hold out we could be there by sunset.

But the battery will be empty in 9.6 miles. At least this is an improvement on 7.1. That little bit of extra speed makes a difference. But we’re also noticing that the zodiac is using slightly less power from the battery than the mother ship. (And they are more or less the same—the mother ship has the slightly bigger Cruise 2 electric outboard and some deep cycle batteries—and a little earlier was requiring the equivalent power for the same speed). 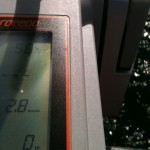 Zero watts from the battery. 2.8 knots from solar power.

And by 9.30 its clear that there is some power being provided by the solar panels. Despite the overcast. On the mother ship it is needing 80 watts to do 2.5 knots and on the zodiac only 50 watts.  The other 30 watts is coming from the sun. The range is now even more at around 12 miles.

By 10.30 we see the magical zero watts being taken from the battery while the dinghy is travelling at 2.8 knots totally from the sun. At this time the battery was down to 56% and has stopped going down.  In the next few hours it stayed around this level. Rising and falling a few percent up and down as the clouds came and went.

For an hour or two we travelled at 3 knots and the log showed the maximum as 3.9 perhaps with the help of a swell coming through. And by the time we reached Long Reef it was clear that we were going to make it on on battery. Without rowing! After 2pm the battery capacity started falling again slowly as the sun began to dip and the angle to out solar panels was not so good. 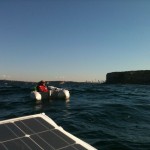 Coming into Sydney heads about 3pm the contribution from solar power was dropping away and maybe now only 20 or 30 watts. We now had only about 2 miles to Little Manly cove and at this point had enough battery power remaining to get to the beach without solar assistance.  The battery was now at 37% and so I could give it a little more power to get the the beach at Little Manly.  The last mile was against the 10 knot breeze and we stopped on the beach with 17% remaining in the battery.

The flexible solar panels from Solar Pty Ltd are ideal for this use and I’m impressed with their performance.  We had two long panels and two square panels each rated around 40 watts and linked in series to give the required voltage. I’ll write more about the technical details of these panels in another article and they’ll be available from today from the Torqeedo Shop, although as yet they are not listed in the on-line store. Stock is available of these panels so if you are interested you can get in touch with me on the enquiry page or as a comment to this post. 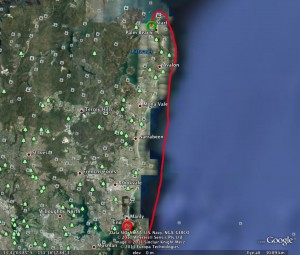 The track of the solar powered zodiac