Erik at the wheel

Its been a while since I wrote about the solar boat…  it has been with the builder since October and has recently been delivered with its survey papers, which means it will be available for hire fairly soon. The boat is currently at Monty’s boatyard for some modifications to include a spare motor and to improve the steering by adding twin rudders.  There is also some finishing work to complete the electrical installation, and a few of the usual fine tuning details associated with a commissioning a boat.

I’ve taken her out on the river for performance testing and to optimise the trim angle for the Cruise 2.  I originally installed the motor with the trim set so that the thrust is angled slightly downwards.  This produces a small uplift and tends to compensate for the stern down trim that you get with a displacement boat under power.  This is the traditional angle for power boats and what is usually recommended by marine engineers.  I have been wondering though if it is the best angle for efficiency because, after all, some of the thrust is expended just to lift the stern of the boat and so it seems to me that this energy is not being used to drive the boat forward.

So we also tested with the motor trimmed so the thrust is more or less parallel to the water surface. This means that all the thrust is directed towards pushing the boat forward ad so it strikes me that this may be more efficient.  So we did quite a few runs at different speeds to try to measure the difference. 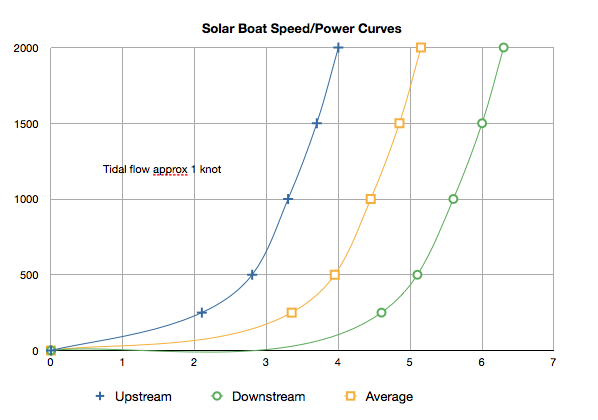 What we found is that with the 5 to 10 knots of breeze that was about, plus the last of the run in tide, these effects added enough variability to our readings that it was largely inconclusive whether there was any measurable difference.  To get some definitive results it would need to be done on a perfectly calm day, so we have no wind effect, and right at slack tide so there is no influence of current.

On the day of the test, in order to minimise the wind effect we chose a reach that was reasonably sheltered from the breeze.  But as we got to know it, it was clear that in this reach there were some eddy currents swirling from at the tail of a bend in the river, and this was enough to cast doubt on the readings.

The motor seemed to run more smoothly at the original trim setting–there was some kind of resonance set up in the other positions so I’ve decided to keep it where it was originally positioned.  (The chart shows the figures for this position of the motor). Choosing the trim setting is important because it dictates the position of the propeller and how it will interact with the rudders.  A single rudder will collide with the propeller, especially when the motor is being raised as will be done every day after use. Whereas twin rudders allows them to be spaced wider than the prop.

The added advantage of twin rudders is that will provide protection for the motor and propeller against collision with the bottom when astern. After all this is intended to be a rental boat available for hire to people without a boat license and chances are that some day she will be backed onto something accidentally that could do damage the motor. 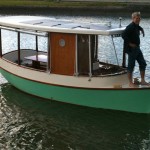 Running on solar power alone, this boat will do about three knots without depleting the batteries at all.  I typically see 150 to 250 watts coming from the solar panels on these winter days with the sun low in the north, and you’ll see from the speed/power curves that this is a boat speed of 2.5 to 3.5 knots.  The battery monitor shows the power going into or out of the batteries and if I adjust the throttle so that it shows zero amps, this means that no power is going to the batteries—or in other words, the solar power is going directly to the motor.  Whenever I’ve done this the boat speed has been right around 3 knots.

Last weekend I had the boat on the Brisbane river for a three trips, two on Saturday and one on Sunday.  These trips were all family groups and gave me a good feel of how the boat will be used. Each trip was about three hours and after the Sunday trip the batteries still had 64% state of charge.  The combination of motor, batteries and solar panels have provided plenty of capacity with no sign of range anxiety from the skipper.