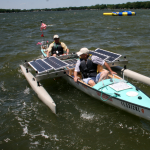 In just a few days a Torqeedo powered solar canoe will embark on a trip down the Illinois and Mississippi Rivers. If the weather is right they plan to leave on 16th June to journey from Chicago to New Orleans in a trimaran canoe of 22ft.

They plan to camp on the riverbank on their expected 2 month voyage and will be using two batteries, powered by solar panels, to propel them downriver. They’re using a Torqeedo Travel for propulsion and I’m not sure whether it is a 503 or a 1003.  It is described variously as a 503 and a 4hp motor, and being that the 1003 is equivalent to a 4hp it could well be the 1003.  In the latest photos it shows the two bladed prop normally fitted to a 1003.  Whichever motor it is, I bet they’ll only be using 100 watts or so, as it should be an easily driven craft. They could expect to make around 3 knots through the water and they can probably count on one or two knots of extra boatspeed from the assisting current. According to the National Parks Service it flows at around 1 mph near the headwaters and around 3 mph towards the mouth. 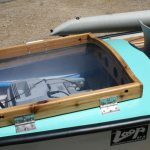 The batteries are mounted in perspex covered hatch, which will make a nice warm glass house kind of environment for the batteries.  Evidently worried about the heat in such a box they have installed a solar powered fan to dissipate the heat in the battery compartment. These batteries run really cool and its only the heat from the sun that they need to handle with the fan.

They have included backup systems in their design and from the photos we can see they have two batteries and two controllers, and I wonder if they will have a spare motor stored below? It will be interesting to see how far they travel each day and what kind of conditions they’ll be facing.  The two sets of solar panels independently charge the two batteries.  The motor will take its power alternately from each of the batteries and they will probably need to switch batteries a few times each day. Each pair of solar panels mounted outboard are pivoted so that they can best be oriented to the sun. They have some kind of special sun dial to help with orientation of the solar panels.  I don’t understand why they wouldn’t just eyeball it and it will be interested to see from their blog how they go about this. 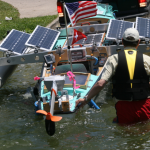 The Torqeedo battery can take a maximum of four amps of charge from solar panels, and this equates to around 120 watts maximum that can be delivered to the battery (its voltage is approximately 30v). The rule of thumb for output  for fixed solar panels on house roofs that are oriented towards the sun at a good angle is that you can expect the equivalent of 5 hrs at the rated output of the panels.  I don’t see in any of their information what the power of their solar arrays are, but they look like they could be around 80 watts per panel for the tilting panels, so that is 160 watts per side.

But the maximum the battery will take is 120 watts so we could expect that under ideal conditions they might expect 5 x 120 or 600 watthrs of power per day.

Even though the solar panels can be tilted they will not always be oriented the best way.  And you’d expect that because the river runs north to south, most of the time the nose of the canoe will be facing south.  And we know that the best orientation for solar panels in the northen hemisphere is to face them to the south.  These panels will be able to be faced to the east or to the west most of the time. That will help in the mornings and the afternoons and might allow them to make up for poor angle during the middle of the day. It will be interesting to see how much power they can get on average. 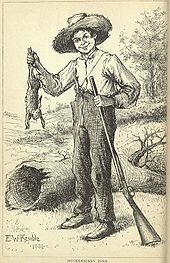 On good days they could expect to travel for 8 to 10 hours at 100 watts and have a little left over for tomorrow, in case its overcast.  And on rainy and overcast days they might drop back the power to 30 or 40 watts and still be able to travel for most of the day.  I’m sure they find it useful to have a current helping them each day and I expect the current will provide half or more of their distance each day.

They have a cooler on board, and some other electrical equipment such as depth sounder GPS and cell phones.  I guess the panels mounted in the centre of he canoe are connected to another battery which provides power for these other gadgets.

It will be interesting to follow their journey and see what adventures they get up to along the way.  After all, they are traveling on Huck Finn’s river and he sure set the standard for good adventures.