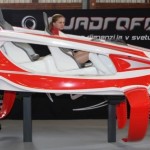 I have long suspected that a hydrofoil based craft would be the ideal platform to achieve nice balance of speed and range with Cruise 4 and such a craft has been displayed at Internatica recently. They claim a top speed of 22 knots and a range of 100km.  Known as a quadfoil it uses a single Cruise 4 and has batteries of 4.5kWh capacity, which implies a pair of Torqeedo 26-104 batteries.

And looking more closely at this new release I think there is need to read between the lines.  There are no pictures of this boat on the water doing the performance that they claim.  So it makes me wonder how much of it is real and how much is wishful thinking.  Lets take a closer look at the claims.

The pictures of the boat show it fitted with a Cruise 4 and a ‘speed prop’ and Torqeedo’s fastest speed prop is rated at 30km/hr and so their claim of a 40km/hr top speed is perhaps a theoretical maximum.  Combined with an absence of actual on water photos it suggests they haven’t really achieved these speeds in practise.  We’ve seen speeds of 26 km/hr with Max’s lightweight boats and much more than this is beyond the ability of the motor fitted with the standard Torqeedo propellers.  Even so, it does have the potential to be a useful craft.

They claim it will raise out of the water at speeds of 12km/hr and if this is so it probably does mean the craft needs very little power to keep it “airborne” once it gets up.  So it may be that their claimed range of 100km can be achieved at speeds around 12 km/hr which would mean an and eight hour trip time.  For this to work it means the power consumption at that speed would be around 500 watts. We’ve seen speeds of 11km/hr on a SeaEagle kayak powered by a 1003 so it does seems plausible to require just half the power with those low drag hydrofoils. 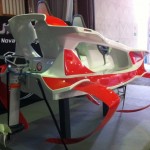 It would be interesting to see some more data about this boat and what speed it can achieve with its payload of two adults.  The claimed ability to charge the batteries in 1 hour from a standard power seems optimistic—that means 4.5 kw from one power point.  It may be possible if the two batteries are separately charged using a charger for each.

If they can get this work as they propose, such a craft puts electric commuting within reach as a practical alternative for island dwellers who travel to work each day from their homes in places such as Scotland Island here nearby where I live.

See the full story on gizmag.